Happy Holidays from our family to yours

Happy Thanksgiving from your friends at Bonefide

Wishing you and your family a Happy Thanksgiving from our Bonefide family to yours.

We Have The Tools To Meet Your Production Needs 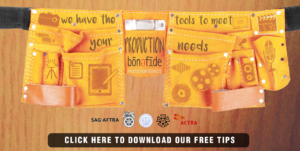 On April 3rd, the Joint Policy Committee (ANA/4As) and SAG-AFTRA announced a tentative agreement has been reached for the 2016 TV & Radio Commercials Contract.

The deal is schedule to be reviewed by SAG-AFTRA Board of Directors on April 9th and 10th. Once approved, the agreement will be sent to the membership for ratification. Following, new rates and terms will be finalized and put into effect.

Details of the agreement will be released after the Board meeting this weekend. Until then, we recommend you plan for new rates for all commercials produced on or after April 1, 2016 and for “new” commercials edited from existing footage, on or after April 1, 2016. Term or Celebrity Contracts that have an effective start date of April 1 may also be affected by any increase in the Pension & Health contribution rate.

Once the agreement has been made public, we will be in touch to assist you with implementing the new contract.
Bonefide is here to answer any questions you may have.

Bonefide offers an innovative approach in managing and coordinating media productions; freeing clients of production worries so they can focus on great creative and growing their own business.

We can partner with your own production team or draw from our extensive network of production professionals. Our depth and experience allow Bonefide to service national and international clients with all types of productions, casting, negotiations, and business affairs.

Make your next production Bonefide!